You might know that Python is build on top of the C programming language. C is an old, relatively low-level programming language that was first published in 1973. It means that today it has a long history of almost 50 years. That is a very long time for something that technological.

Nowadays C is known to be a very fast programming language. Much faster than Python. All compiled languages are faster than Python, but C is fast even compared to other compiled higher-level languages. Take a look at blog post to check which is the most energy efficient language.

Of course, if the speed of a language was the only criteria in the process of choosing a programming language for a project, everyone would just choose C and be done with it. This is now the case. The main criteria is usually the implementation time. Python is extremely powerful language in terms of implementation time, but it lacks pure speed. In order to overcome this disadvantage, it is possible to implement the most time consuming functions of a program in C and import them directly into the Python program. In this blog post I will show you how to do it on Windows 10. After a bit of research I noticed that there are not so many resources available on the Internet.

I have practically 0 experience on C. The point of this blog post is to show you how to implement a C extension, not to teach you how to program in C.

Setting up the compiler

I am going to assume that you already have Python installed and you know how to use it. If this is the case, the first step for you is to download the correct C compiler and install in on your machine. If you don’t have Python, please install it fist.

After the download is complete, run the .exe file and the Visual Studio Installer will be downloaded. Run the installer and select Visual C++ build tools and click Install. 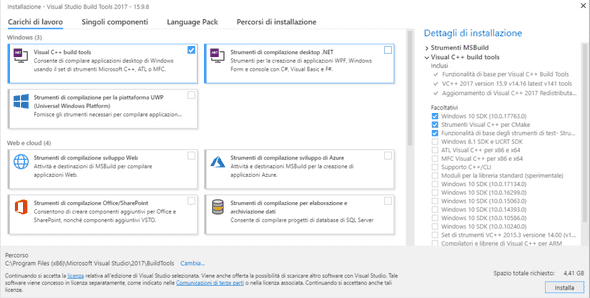 Do not unselect the thee optional components on the right. I first tried installing only the build tools without any of the optionals, but then I wasn’t able to run the compiler. I think that at least the Windows 10 SDK is needed, I am not sure about the other two.

I suggest you to create a virtual environment for the purpose of this excercise. You do not want to clutter up your main Python installation with these useless C libraries. I am going to assume that you are already familiar with virtual environment so that the post doesn’t become too long.

Go to your project folder and create a file called helloworldmodule.c and the let’s get started.

This line imports the Python header file and make the Python C API available to use. Without this include line you wouldn’t be able to work with Python code. If you created a virtual environment, you should be able to locate the header file in the Include folder of the venv. In my case the path is C:\Users\<Username>\Envs\CExt\Include\Python.h.

As you can see, the first function we are going to be doing is a simple Hello World. What you see above is a module level python method in C. It is alway the same, only the name naturally may change. The function name is say_hello and it consumes self and *args as its arguments. The type of every Python object in C is PyObject. Then the function simply prints Hello World. Remember that in C you need to worry about line changes manually.

Py_RETURN_NONE; is a curious detail about the function. In Python we are used to that when a function or a method doesn’t return anything, it will still return None. At C level, we need to take care about this manually. If we do not return tell C to return None it will not return anything at Python level. Not even None.

Next we are going to create a method table.

The fourth entry points to the contents of the docstring.

The method struct must always end with {NULL, NULL, 0, NULL}. It tells the compiler that the method definitions are finished.

The first entry is always PyModuleDef_HEAD_INIT. It is just something that is needed for every module. Next comes the name of the new module. This is the one that we are going to be importing from our Python file. The third entry is the docstring. In this case we can just put an empty string there.

-1 means that the module has global state and therefore can’t have be used in various sub-interpreters at the same time.

The last entry is a pointer to the method table that we defined before.

The last step of the C code is to actually create the module.

We are now done with the C part of the program. Let’s take a look at the setup.py next.

Creating the setup.py file and building the C extension

setup.py is the file that is used for compiling the C extension. We are using setuptools for creating the extension. setuptools is a library used for creating all kinds of python packages, not necessarily only C extensions. Create a new file called setup.py in your project folder where you should already have also the helloworldmodule.c file.

The keyword arguments are quite self-explanatory. If you decided to upload your module to Python Package Index, this data would show up there.

It is the ext_modules that we are interested about when our module contains C extensions. ext_modules modules is a list containing all external dependencies to be built when python setup.py build command is run. The type of the items in the list must be of setuptools.Extension.

The Extension class defines our C extension module. The first argument is the name of the module. The second one is a list of filenames. The filenames are relative to the setup.py root. In our case the helloworldmodule.c file is in the same directory with the setup.py, so we do not have to write out the absolute path.

That is all we need in order to build the extension and create the module.

Open the terminal and navigate to your project folder. Run the following commands.

You should now have the package installed in your virtual environment. The next step is to create a Python program in order to test our C extension.

Running the C extension in a Python program

Create a new file called main.py in your project folder.

Run the file and as a result you should see the words Hello World in your terminal. If you see the words, well done! You can go take a break and start brainstorming some more complicated and useful extensions. Maybe some day you will challenge numpy’s optimized methods with your own libraries.

If your code doesn’t work, check that you don’t get any errors when running python setup.py build. Go through the C part carefully. It is easy to make small mistakes there.

Creating a C extension from scratch sure can be quite an intimidating and confusing task, if you don’t have any previous experience from writing/reading C code. The C API documentation is a good place to start gathering more information if you are interested in creating something more useful or if you just want to learn some more.

Learning this stuff isn’t surely waste of time, because it can help you understand a lot better how Python works under the hood.